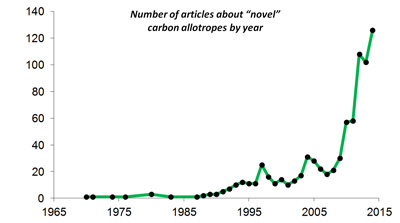 Nowadays the modeling of new carbon allotropes is very popular. Mistakes in classification and naming of carbon allotropes are almost inevitable due to vast amount of unorganized data. Additionaly, a lot of allotropes were re-discovered many times by different research groups. Inspired by this problems we created SACADA - Samara Carbon Allotrope Database [1]. Here we gathered together all available data about 3-periodic carbon allotropes based on more that 500 papers from scientific databases Web of Science and Scopus.

Here we shortly describe the content of SACADA table by columns:

1. Serial Number (N). Serial number of the structure assigned to all chemically distinct allotropes: for example we have 4 entries for the underlying net [4] of diamond dia that is associated also to the so called yne-diamond where for some or all bond there is a -C≡C- inserted, furthermore one of the latter (entry # 4, Y-II) is also 2-fold interpenetrated. The numbers are clickable for downloading .tar.gz archives that contains two .cif files. One of them, with _IN suffix , corresponds to the net in maximal symmetry embedding (ideal nets with C-C bonds all equal to 1.00). The other, .cif, provides the DFT-optimized structure in maximal space group symmetry.
2. Topology. This column contains the name for the topology of the underlying net of each carbon allotrope. The topology is clickable if the net is included in the RCSR database [5], and will redirect to the appropriate RCSR page.
3. Space group. Space group of the ideal nets.
4. Number of Independent Nodes. Number of topological independent nodes of the ideal nets.
5. CN (Ratio). The coordination number (CN) of nodes for ideal nets. The ratio between the numbers of nodes with different CN are shown in parentheses. The ratio is not shown if the numbers of nodes with different CN are equal. So e.g. for entry 2 the reported 2,4 means that there are 2-c and 4-connected nodes in equal ratio.
6. Pearson. The Pearson symbol of the ideal nets give information on the Bravais lattice and the total number of atoms in the unit cell (Read more about Pearson symbol).
7. Transitivity. Transitivity of the tiling for the ideal net [pqrs], where p, q, r and s are numbers of inequivalent vertices, edges, faces and tiles in the tiling. This is a kind of measure of the complexity of the net.
8. Names. All names of the carbon allotrope reported in the original literature for a given topology.
9. Pressure, GPa. Pressure (in GPa units) at which the structure was computed.
10. Density, g/cm³. Density of the structure in g/cm³ units. The first value in blue (without ref.) is calculated from our DFT optimized structure.
11. Gap, eV. Energy Band gap for the structure (in eV units).
12. Relative energy, eV/atom. Energy relative to diamond. This energy was computed according the formula:
Relative energy = (E_cell)/(N_atoms) - (E_diam)/(N_diam);
where E_cell is the allotrope unit cell energy, N_atoms is the number of atoms per unit cell.
E_diam and N_diam are the same values for diamond. All computations were performed using VASP package, using the next conditions:
energy cutoff = 400 eV, GGA-PBE pseudopotential, tolerance for ionic relaxation was set 1.0*10-6 eV. K-mesh was generated automatically for each allotrope as it is implemented in VASP package.
13. Bulk, GPa. Bulk modulus for the structure (in GPa units).
14. Shear, GPa. Shear modulus for the structure (in GPa units).
15. Vickers, GPa. Vickers hardness for the structure (in GPa units).
16. Year. Year of the first report of the structure in the literature.
17. Refs. All references where each structure was mentioned. The references are arranged by years.